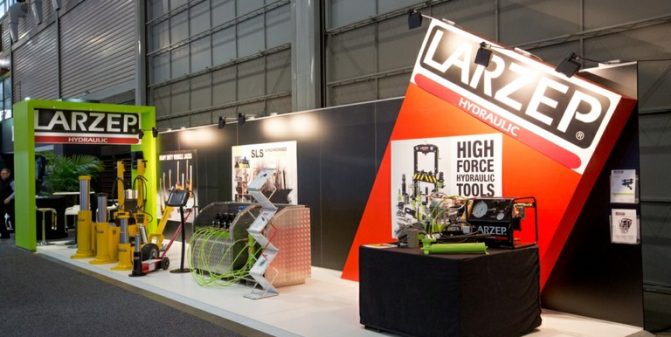 Larzep was proud to feature a range of new and existing products including our HN & HL (Mammut) series air hydraulic jacks, our synchronised lift system, a range of manual, air and electric powered hydraulic pumps, hydrotest pumps, aluminium cylinders and torque wrenches. Larzep also exhibited new products including wedge and flange spreaders.
Attendance and interest at the show was excellent, with Larzep meeting with many existing and new customers. Of particular interest to visitors was Larzep’s new range of 15 tonne wedge spreaders, which require a gap of only 5mm and are suitable for use in harsh operating conditions including offshore environments. Larzep also showcased to customers our synchronised lift system which has been used around the world in infrastructure projects such as bridge and stadium construction, as well as in mining applications to lift draglines and cranes. Operated with a touch screen, the system is easy to use and requires minimal training to evenly lift, lower, push or pull loads.
Larzep also proudly displayed our range of air operated hydraulic jacks, which have become the market preferred jack for lifting heavy duty mining vehicles. The range includes jacks with up to 150tn capacity and 554mm of stroke with 1 stage or telescopic 2 and 3 stage jacks available.
The tradeshow was a success with the showcasing of new and existing products confirming with Australian customers the quality and competitiveness of Larzep’s products.